Cat lovers, animal lovers, diamond lovers and slot lovers can easily find something they enjoy in IGT’s Kitty Glitter slot. These pampered pets have everything they could want in life and don’t they just know it. This 5 reel video slot could not be simpler and yet it appeals to all levels of players due to its engaging format and lovable theme. Originally built as a land-based casino slot machine, Kitty Glitter was later recreated for online and mobile play.

Kitty Glitter was first made available online in March 2010 and players quickly got on board, making it an instant hit online. Las Vegas-based developer IGT knew they were onto a winner as the game had already been a winner as a cabinet slot machine for many years. Therefore its chances of being a success online were pretty good for the get go and it didn’t let them down. 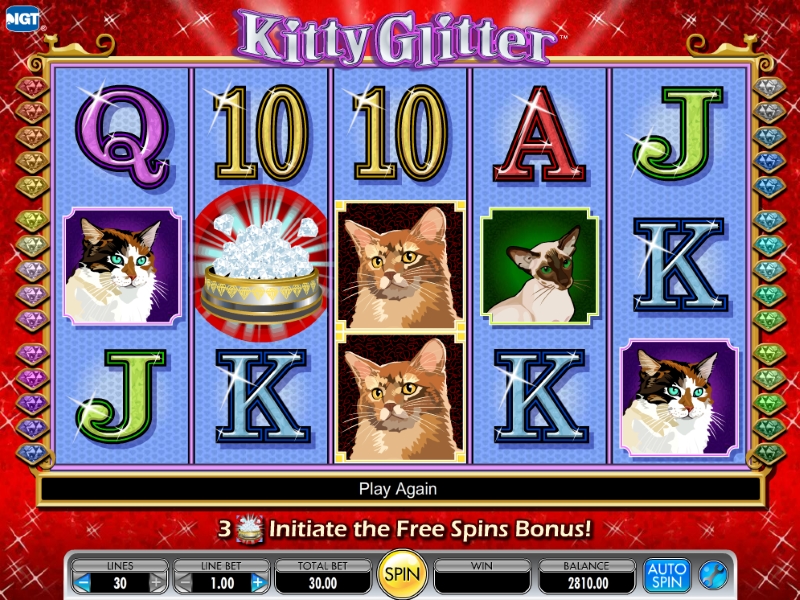 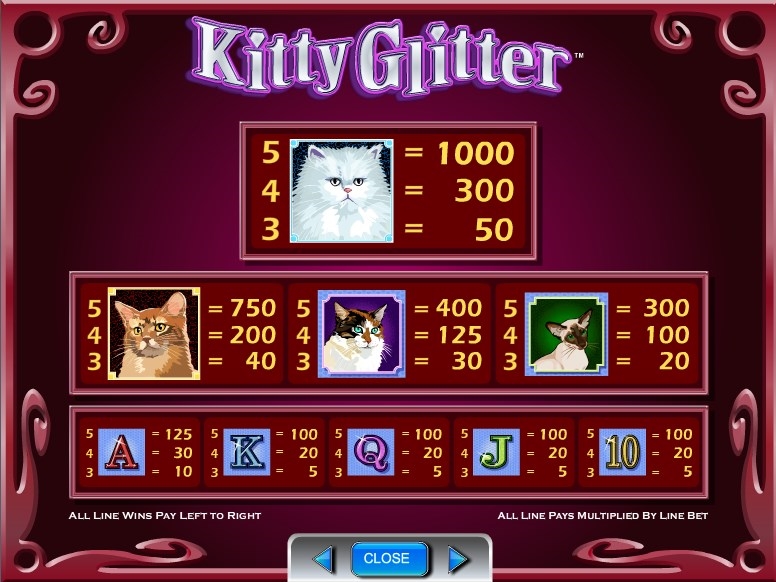 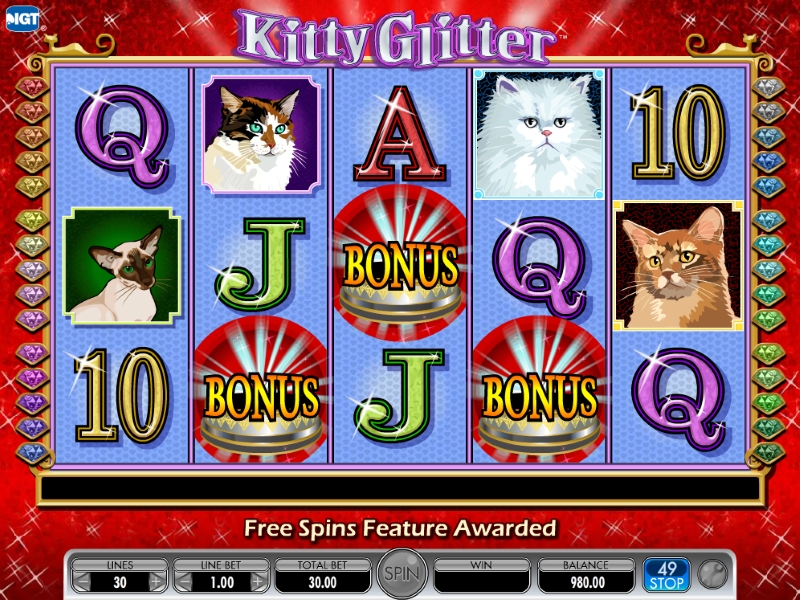 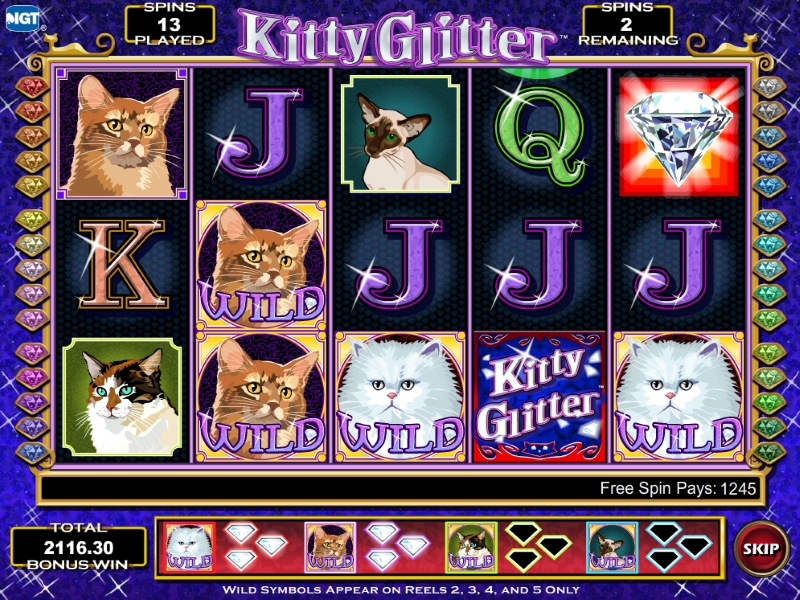 Why is Kitty Glitter slot so popular?
It got cats in it, need I say more. IGT were one of the first slots developers to realize that people love cats, possibly more than they love other human beings. The Kitty Glitter slot plays on people’s love for cats and how they will happily pamper their prized pets with every gift and jewel imaginable. But that is not the only reason Kitty Glitter is so popular.

It also has a great game engine that works really well for both novices and long term slots players. The bonus round, which involves collecting lots of diamonds to release more wilds, is really addictive and gets players gripped from the get go. There are also plenty of wins in the regular game to keep you engaged for long periods – just keep an eye on your spending!

Kitty Glitter originally started life as a 5 reel, 30 payline slot machine. It was built by Las Vegas-based company IGT and according to reports was released in 2005 and quickly proved itself to be a hit with players. The combination of a rare high variance IGT slot mixed with a fun and friendly theme has made Kitty Glitter a hit all over the world. It was later released by IGT online and in more recent times made it onto handheld devices such as tablets and phones.

Kitty Glitter main game
A prominent feature on the reels in Kitty Glitter is the Cats. There are some adorable felines including Calico, Siamese, Persian and Tabby cats. There are also wilds and stacked wilds on all reels, scatters and your classic 10-J-Q-K symbols. I generally find that the biggest wins in the main game come when you get multiple stacked wilds across the reels. With 30 paylines this can sometimes lead to some impressive wins.

Kitty Glitter Free Spins Bonus Round
The bonus round in Kitty Glitter slot is triggered by landing 3 bowl of diamonds scatter symbol on reels 2,3 and 4 simultaneously.  This will reward you with 15 free spins on a new set of reels, called the ‘richer set’ of reels. During the free spins you may see a diamond symbol appear on reel 5. Each time one appears it will leap out off the reel and be added to a board below the game. Every 3 diamonds you get will turn one of the cats wild (not literally) each time it appears during the bonus round.  Due to Kitty Glitter being quite a volatile slot, you may find that it is quite hard to trigger the bonus round, however when you do it can give out some big wins.

Big pay day!
It doesn’t happen very often and it is something that Kitty Glitter fans all over the world dream about. That is getting all 12 diamonds to make all 4 cat symbols wild and re-triggering the bonus round. Some mega wins have been recorded in the past when this has happened, but don’t hold your breath as it is extremely rare. Having discovered the RTP for this slot is 93.51%-94.92%, I personally think there are many more slots likely to offer a much better return for your money. However, we don’t all play slots just for the level of return we anticipate we are going to get.

Key symbols in Kitty Glitter slot
Kitty Glitter logo – This is the Wild symbol in Kitty Glitter and you will find it on its own or stacked on all 5 reels. All pays are multiplied by 1x and it will replace all symbols except for the bonus scatter.

All that glitters…
Kitty Glitter has obvious appeal with its theme, which surprisingly hasn’t been jumped on by every other developer out there. It’s loyal fans eagerly followed the game as it was taken online and it frequently finds itself in the top played games at many online casinos. That being said, the bonus round can be very hit and miss and collecting all the diamonds needed to really unlock the big rewards in Kitty Glitter is not the easiest thing to do. In terms of format and play this is a very engaging slot, but you may find it has a way of eating into your bank balance without you really noticing.

If you have not played Kitty Glitter slot before then this video may prove to be beneficial for a few reasons. Firstly, you may find it useful from a point of view that you can see what the Bonus Round looks like and how this unfolds. There are also descriptions in this video telling you what is going on whilst it is being played, something which makes it easier to understand. What you should be mindful of though is that the Bonus Round is rarely this quick to trigger and you may go through many spins (and money) before triggering it yourself. This Kitty Glitter video has been edited, so you get the best bits much quicker.

Why play Kitty Glitter slot for free?
If you like the look of a slot then you may feel that it is more fun to go play it for real money, but here me out and I will explain why I think it is always good to play it for free before you deposit. All slots, including Kitty Glitter are different in many ways. It is a good idea to get familiar with all the symbols in the game. Key symbols include the wilds, scatters and potentially the highest paying symbols. Playing a slot game like Kitty Glitter is always much more exciting if you know what is about to happen, the anticipation of a big win is what makes it fun to play for me.

The other main reason for playing a slot like Kitty Glitter for free first is that you can figure out if you like it before spending money on it. So many times I have heard players say things like “this game doesn’t pay” or “why can’t I get the bonus to trigger”, when they haven’t figured out that the slot they are playing is high variance (bonus rounds are less frequent) or maybe doesn’t have a bonus round at all. I am pleased to say that Kitty Glitter does have a bonus round, which can be rewarding depending on how far you progress. If there is no free play version of Kitty Glitter on this page then it might be worth paying a visit to this page on slots website Gamingslots, which typically has a working version free play version of the game.